The city encourages public input, but that doesn't mean they're gonna read it!

Harrison Thorp 9: a.m. ONLY IN THE VOICE 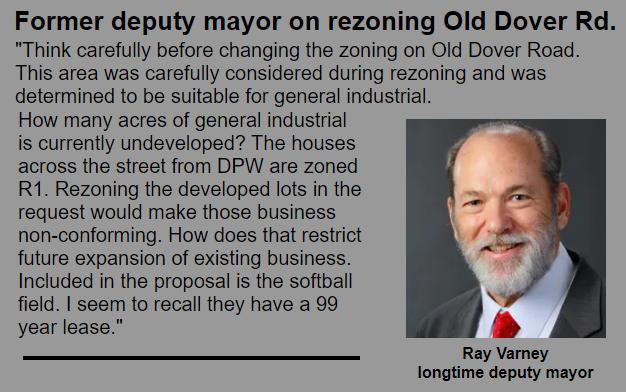 ROCHESTER - Among those to give testimony during Tuesday's public hearing on rezoning around the city's former DPW headquarters was former longtime city councilor Ray Varney.
The city released a statement on the morning of the hearing encouraging the public to provide input either in-person or online, but those who did it online got short shrift, they said.
Sadly, they weren't surprised.
"I suppose Blaine (Cox, city manager) could've read them, maybe he didn't want to waste the time," said Varney, who spent 14 years on the City Council starting in 2006, his last 10 as deputy mayor.
Varney also acknowledged his disappointment with the current City Council
and the city's language for its public notice for the hearing.

"The public notice didn't give the specific area for the rezoning and didn't specify what the proposed zoning change was," Varney noted.
As for the council, itself, he added, "This council frustrates me, but they're gonna do whatever they want to do."
The Rochester Voice obtained a copy of the public notice for the hearing and the emails from Varney and another city resident.
Geraldine Lark of Pickering Road also expressed chagrin that Cox chose not to publicly read her feelings on the Old Dover Road rezoning proposal, but said his dismissiveness was par for the course.
"No, I'm not surprised," she told The Voice. "I've lived in Rochester for 36 years. City officials always do what they want, although the recent stand-down over the Gonic development was a pleasant surprise."
Three residents - Tom Kaczynski, Susan Rice and Deborah Lemoray - did speak in person at the hearing, after which Cox noted to the council that Varney and Lark had also submitted comments. Cox, however, deigned to read them aloud, only noting that the "subject" line in the emails was "Old Dover Road rezoning."

Both the public notice for the hearing and the emails from Varney and Lark were obtained through a Right to Know request sent to City Attorney Terence O'Rourke.
The Voice also made a 91-A request for any city documents regarding the decision to not publicly read the emails. O'Rourke answered that there were no relevant documents.
Right to Know requests only apply to the documents in the purview of the city. If there are no documents, if it were decided during a nonmeeting, or even just a personal fiat by a city official, there is nothing to compel city officials to come clean.
Meanwhile, six months after the Legislature created a "right-to-know ombudsman," Gov. Chris Sununu has nominated attorney Thomas Kehr of Concord for the position. The Executive Council could vote on Kehr's nomination as early as next week.