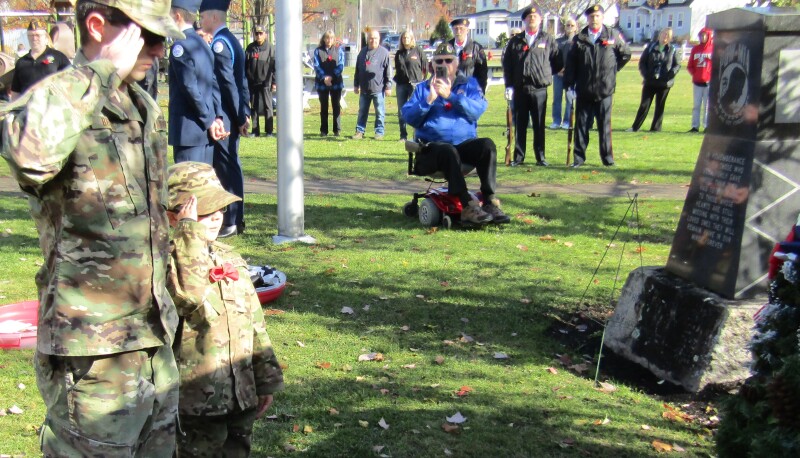 Cayden Briggs, and his dad, Air National Guard Sgt. Dalton Briggs, salute after laying a wreath to honor all who served during today's Veterans Day exercises at the Rochester Common. (Rochester Voice photos)

ROCHESTER - When six-year-old Cayden Briggs was in kindergarten he already knew what he wanted to do when he grew up: enlist in the Air Force Reserves like his dad.

And so it was special for Air National Guard Sgt. Dalton Briggs when he and Cayden together laid a wreath and saluted all those who served in the Air Force before them today during Veterans Day ceremonies at the Rochester Common.

The 20-minute ceremony featured an opening and closing prayers by Veterans Council Chaplain Dennis Balhumeur, the laying of the wreaths of the five services and POW/MIA and a military salute by a three-man Honor Guard.

Also on hand were the Spaulding ROTC cadets and Color Guards.

Marine Corp Pvt. Dave Tyler, an American Legion Rider, also read a proclamation by President Biden honoring all the servicemen and women who have sacrificed for their country.

Dalton Briggs, who went to Spaulding High School and now lives in Somersworth, said Veterans Day comes just once a year, "but the country as a

whole should be supporting our veterans all year, because they were there to support us."

His cousin, Connor Schoonmaker, a Marine who also laid a wreath today for all the Marines who served, said those from his service are a "different breed."

Schoonmaker, who was stationed in North Carolina while on active duty, said he celebrated the Marines' birthday on Wednesday so this had been a busy week.

"It's so great, you see a Marine and say 'Happy Birthday' and they know exactly what you're talking about," he said.