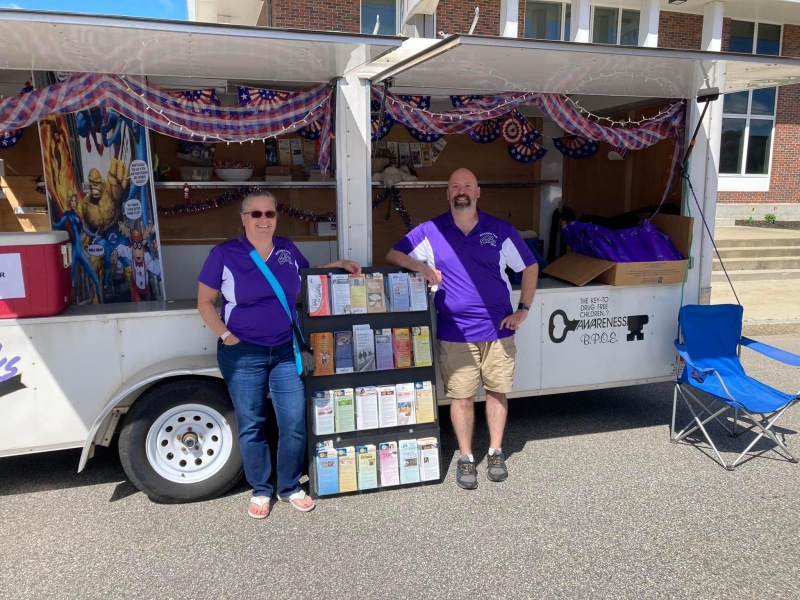 From left, Deanna Souza, Esteemed Loyal Knight and Drug Awareness Committee Co-chair and Matthew Sanborn, Exalted Ruler, Rochester Elks Lodge #1393.at Somersworth Children's Festival this past weekend. (Courtesy photo)
SOMERSWORTH - The Rochester Elks Lodge #1393 were on hand for the Somersworth Children's Festival on Friday and Saturday with the state's Drug Awareness Trailer.
Representing the Lodge on Friday evening we're Deanna Souza, Esteemed Loyal knight & Mark Guilmett, Past Exalted Ruler & Lodge Trustee. Saturday morning's representation was Matt Sanborn Exalted Ruler, Deanna Souza Loyal Knight and Mark Guilmett Past Exalted Ruler and current Lodge Trustee.
Information pamphlets about the dangers of illegal drug use were distributed to attendees visiting the Drug Awareness Trailer. Elroy the Elk Mascot was also on hand to greet the festivalgoers.
The Elks National Drug Awareness Program strives to teach all children and parents about the dangers of illegal drug use and prevent the abuse of legalized and prescription drugs. As the largest volunteer drug awareness program in the United States, the program relies on state, district and Lodge volunteers to promote a drug-free lifestyle.
By taking pride in America's communities and youth, the program takes action against youth drug
use through education and inspiration.
Every year, the Elks Drug Awareness Program hands out more than seven million pieces of anti-drug literature to parents, teachers and kids. The brochures are primarily distributed through the program's 90 drug education trailers, which travel to community gatherings, such as fairs and sporting events.
The Elks have also teamed with Marvel Comic Books to produce a book featuring Marvel superheroes and Elroy the Elk in a battle against underage drinking.
Other educational materials offered by the program include prevention tools for parents, videos, coloring books, posters and public service announcements.
For more information about the Rochester Lodge visit www.elks.org/1393 and for all the Elks programs visit www.elks.org
Read more from:
Top Stories
Tags:
None
Share: