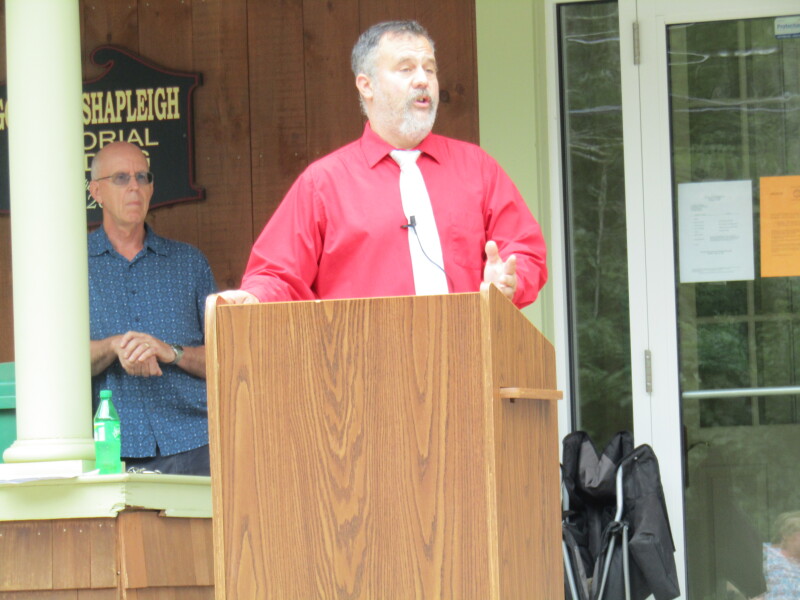 Selectboard Chair Chuck Russell at July 17 Public Hearing where he was moderator despite having profited in cannabis industry and being a staunch advocate of retail stores. (Rochester Voice file photo)

LEBANON, Maine - A relatively strong turnout for two Special Referendum votes on retail marijuana sales on Tuesday led to a narrow victory for those looking to ban recreational shops in this town of about 7,000.

By a margin of one vote, 324-323 residents voted to prohibit recreational cannabis businesses, while medical retail was approved by just eight ballots, 327-319.

It was the second vote on similar referendums that were both defeated on June 8 during regular Election Day voting.

Town selectmen forced a second vote because they said the specter of lawsuits loomed large if it wasn't passed, however, one selectmen, James Dupuis, who backs legalizing both retail outlets, said it was only "informed speculation" that led him to believe legal action might be taken.

No pot shops - all grouped on the Route 202 corridor - have actually filed lawsuits or publicly announced they were going to sue the town.

Selectmen Chair Chuck Russell, who is facing a second recall vote later this summer and is seen as compromised due to his admitted involvement in the cannabis industry, said during a July 17 Public Hearing that he would continue forcing a revote till it passes.

Several proponents for the ban were also unavailable.

A recount is already planned on the recreational retail vote, it has been confirmed.

This story will be updated.