Police: Man was jogging when struck, was wearing headlamp with strobe flashers 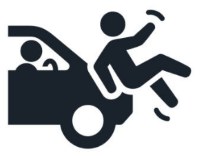 ROCHESTER - The hit and run victim from Monday's incident near Burger King on North Main Street has been identified as a 36-year-old Rochester man who was jogging when he was struck, Rochester Police confirmed today.

The man is recovering from serious injuries that now appear not to be life threatening, Rochester Police Capt. Todd Pinkham said this morning.

"It appears the male was jogging in the area and was wearing a headlamp with front and rear strobes," Pinkham said.

He added that the man was jogging on North Main Street and going past McDuffee Street when the vehicle pulled out of McDuffee and struck him.

Pinkham noted there could be damage to the suspect car, but it's not certain. He said police are hoping for tips from the public and possible surveillance images that could lead to a suspect or person of interest.

The victim was struck shortly before 6 a.m., and taken to Portsmouth Regional Hospital for treatment of serious injuries.

Police and rescue initially responded to the area of North Main, Twombly and McDuffee streets for a report of a pedestrian found in the roadway.

A vehicle that may have been seen in the area around that time is being described as a blue SUV.

Police are asking that anyone who may have been in the area around that time to contact them with any information at 603-330-7128. Tipsters can also provide information and remain anonymous by calling the Rochester Crime Line at 603-335-6500 or Text to: CRIMES (274637) Body of Text: TEXT4CASH + your tip. Cash rewards are offered for information that leads to an arrest.