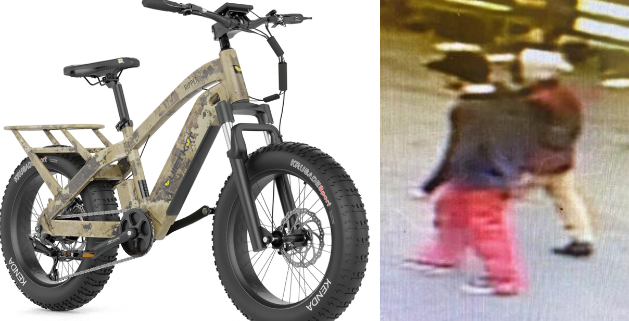 A picture of a similar bike to the ones stolen; right, surveillance image of persons of interest in the theft.

ROCHESTER - Rochester Police are on the hunt for two possible suspects in a pair of robberies of electric bikes from Coyote Creek Outfitters earlier this month.

Separate thefts were reported from the 22 Farmington Road store on Nov. 2 and again on Monday. Both times a pair of bikes were stolen by two men.

In the first robbery Coyote Creek advised police they had found two bikes stolen. In the most recent incident, they called police to report they had seen two males flee with the stolen bikes.

Both times the bandits made off with camo-colored Quietkat electric bikes.

In the Monday incident a store associate reported to police that he had followed them to a trail behind the Farmington Road Ford dealership that connects to the Shell station near La Corona, according to dispatch notes.

Police searched several area trails including behind Home Depot but came up empty.

If anyone has any information about the incident or know the identity and/or whereabouts of the males pictured below, contact the Rochester Police Department at 603-330-7128. You can also provide information and remain anonymous by calling the Rochester Crime Line at 603-335-6500 or Text to: CRIMES (274637) Body of Text: TEXT4CASH + your tip. Cash rewards are offered for information that leads to an arrest. Reference 21-3450-OF.