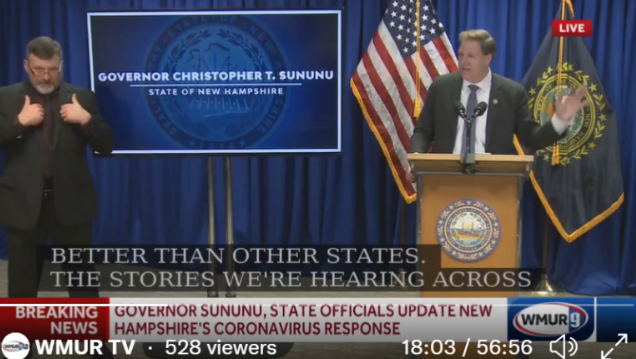 CONCORD - With the number of new COVID-19 cases doubling in a week to about 2,500 a day across the state, Gov. Chris Sununu announced Wednesday that the Omicron variant of COVID-19 is now the dominant strain and warned that hospitalizations will likely continue to be very high for the next two months.

The state also announced at Sununu's press conference that it will no longer offer daily numbers for deaths from the virus but will put out an average, which now is about nine or 10 fatalities per day.

Dr. Benjamin Chan, state epidemiologist, said the state has currently 20,458 positive COVID-19 cases with 2,438 new cases reported Wednesday, an average of 2,500 a day now. The PCR positivity rate has gone up from 20 percent to 21 percent since last week.

Deaths from the virus remain high, he said, with the state reporting a total of 2,032 during the pandemic.

"Going forward because the daily numbers fluctuate so much we are going to start reporting the average number of COVID deaths that have occurred each day. We continue to see an average of 9 to 10 deaths occurring each day in New Hampshire," Chan said.

Sununu said: "We have a whole series of checks and balances on those numbers so they are super accurate.

"We're just seeing more drastic fluctuations from people being out to what's happening over the weekend to Omicron. The numbers will get a little higher and a little more extreme if you will potentially over the next few weeks," Sununu said.

Sununu was questioned about why the change in reporting deaths after two years. Sununu's spokesman Ben Vihstadt sent reporters a clarification.

"The State will continue to report daily deaths on our state dashboard and in the daily report, as we have since the beginning of the pandemic. The dashboard will be updated today.

"The only thing that is changing is that the weekly press conferences and daily reports will now also include the rolling average of deaths over the last week to provide a more complete picture," Vihstadt said.

At the press conference Sununu said the good news is that the Omicron variant is less lethal than the Delta variant but the bad news is it is so much more contagious, Sununu said.

Sununu said the number of current hospitalizations at 415 "scare" him and keep him daily on his toes with health-care providers and national officials. The state has to "be nimble" and move resources around to respond to the crisis, he said.

Sununu said just shy of 200 National Guard units will be deployed across the state next week at hospitals, nursing homes, and in the prison system where many workers are sick with the virus.

Sununu said the state is doing "a good job" learning from other states and working comprehensively but that hospitals "sure as heck are at capacity."

The state does not test every new case for the Omicron variant but does selective genomic sampling which went from over 50 percent last week to now the vast majority of the cases, Sununu said.

"There is a very strong surge of Omicron across the state," he said. "We are likely to see more cases than we have ever seen."

Up until now, New Hampshire's dominant strain of the virus was the Delta variant.
The metrics being studied the most, he said, are hospitalizations and fatalities as more in-home testing is leading to some individuals not reporting positives.

Sununu encouraged everyone to get vaccinated and visit fixed and mobile sites throughout the state.

This past Saturday, the state held its second booster blitz by appointment available for about 12,000 but at one point, they offered walk-ins because there were openings.

The governor's message to all is "if you are feeling sick pull yourself out of the population."

Even if you are vaccinated, Sununu said, keep track of your symptoms.

Teams to help administer monoclonal antibodies have arrived from FEMA but they came just as officials are finding that Omicron is resistant to those antibodies.

"We are going to transition some of the FEMA folks rather than send them back. (We're) asking federal partners to reuse individuals at vaccine sites, so we don't lose them," Sununu said.
FEMA has helped with paramedic teams who will extend their deployment into February, Sununu said.

Another team from the federal Department of Defense, active military are here to support staff at Elliot Hospital in Manchester "which has taken the brunt," of cases, Sununu said.

The National Guard has had 70 units deployed for several weeks in health care and nursing home settings. Another 100 have been called up and will help in a week, and another 25 are now heading to the prison system which is facing a lot of staffing needs.

Over the past few years, premiums have dropped considerably, making health insurance more affordable, he said.

"As with COVID, you never know when you are going to need it," he said, urging people who have no insurance to go to healthcare.gov. to sign up by the Saturday deadline at midnight.

New Hampshire is in a better position than practically any other state, in offering and having available in-home testing for the virus, the governor said.

That might change in a few weeks, he said, as the national demand for it grows and the supply is limited.

He gave credit to Health and Human Services Commissioner Lori Shibinette for "getting ahead of the ball" in saying "Yes to the Test" and school systems have access to testing, he said. If they need tests, Sununu suggested they reach out to the state.