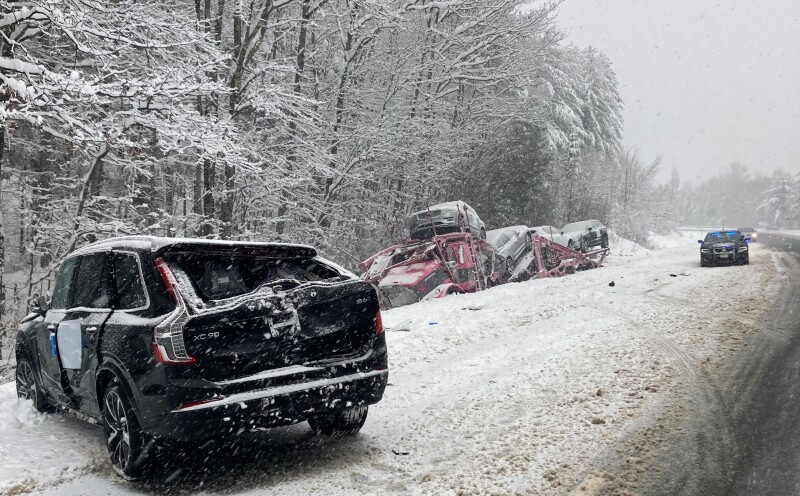 The vehicle at left was on top of the carrier and tumbled off into the travel lane, sustaining considerable damage. (NHSP photo)

WARNER - Driving on New Hampshire's back roads and even its interstates was a nightmare on Monday with whiteout conditions and heavy snows falling throughout the day, prompting the DOT to post reduced speed limits of 45 mph on several interstates statewide.

Even with all the precautions, there was still a flurry of travel-related crashes including one in Warner around 10:30 a.m., where it was reported a commercial motor vehicle car carrier went off the roadway on I-89 south, near mile marker 21.8 in the town of Warner.

Troopers arrived on scene to find a fully loaded car carrier off the roadway to the right hand side. According to a safety department press release, one of the vehicles that was loaded on top of the car carrier became dislodged and rolled off and onto the car carrier before coming to a final rest in the right travel lane.

The operator of the car carrier was identified as Alex Ferguson, 62, of Stamford, Conn.

He was transported to a Concord hospital for what is believed to be minor injuries.

The right lane was shut down for several hours as a heavy-duty wrecker service worked on removing the car carrier. New Hampshire State Police were assisted on scene with the lane closure by New Hampshire Department of Transportation.

If anyone witnessed or has information about this incident, please contact Trooper Matthew Gagnon at Matthew.P.Gagnon@dos.nh.gov.