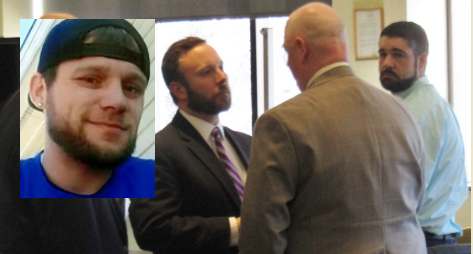 Defense attorney David Tencza, left, confers with a Sheriff's Deputy as Gregory Collins looks on after a mistrial is declared in his 2019 trial. (Rochester Voice file photo; Rawson/Courtesy)

DOVER - It took a little over four hours today for a Strafford County jury to find a Milton man guilty in the 2018 fentanyl overdose death of a Rochester man.

Prosecutors had decided to retry the case after an April 2019 trial ended with a hung jury after jurors could not agree on a verdict in the death resulting case against Gregory Collins, 41, of Lord Lane.

Collins, who was charged with dispensing a controlled drug - death resulting faces up to life in prison when he is sentenced later this year.

Collins supplied the fentanyl to Rochester resident Robert Rawson, 28, who died on Feb. 15, 2018.

Another Rochester man, Peter Miltner, who testified he and Collins delivered the fentanyl to Rawson, has already been sentenced for his part in Rawson's death. Miltner is serving four to eight years in state prison.

The jury declared Collins guilty around 3:20 this afternoon.