Harrison Thorp 10 a.m. ONLY IN THE VOICE 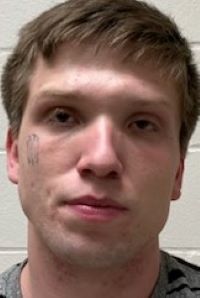 DOVER - A Sanford, Maine, man has been indicted on five felony counts in connection with drug, firearms and motor vehicle charges from his encounter with Rochester police in May, an encounter that saw him driving recklessly through the downtown till he crashed on North Main Street.

Benjamin Ball, 26, faces a maximum penalty of 35 years in a New Hampshire State Prison on charges of felon in possession of a firearm, fentanyl possession and three counts of reckless conduct for driving at night with his lights off, improper lane control and speeding on heavily traveled roads as he sought to elude police.

All the charges are Class B felonies punishable by up to seven years imprisonment apiece.

The incident unfolded on May around 8:30 p.m. when a Rochester Police Officer was on patrol in the area of Knight Street when he observed a vehicle leaving Cumberland Farms with its headlights off.

The officer pulled behind the vehicle and noticed what appeared to be a hand-written registration plate. According to a press release sent after the arrest, the officer activated their cruiser's emergency lights, but the vehicle continued on without stopping.

The vehicle turned from Knight Street onto Charles Street, passing another vehicle on the left crossing over the double yellow line into oncoming traffic, police say, causing, a vehicle in the opposite lane to stop to avoid an accident.

"The vehicle continued traveling on Charles Street toward the intersection of Columbus Avenue before turning onto different streets," Rochester Police Capt. Todd Pinkham said a day after the incident. "It appeared as if it was not familiar with the area due to the route it was taking."

The vehicle continued onto Washington Street before turning onto North Main Street where the operator attempted to turn but crashed into an electronic message sign.

Ball fled the vehicle but was quickly taken into custody.

Officers located a handgun in the vehicle and also an undetermined amount of fentanyl as well as methamphetamine. Officers also learned that Ball was a convicted felon and was wanted out of Oxford, Maine.