Man gets two and a half years, reduced charges in death of Frisbie security guard 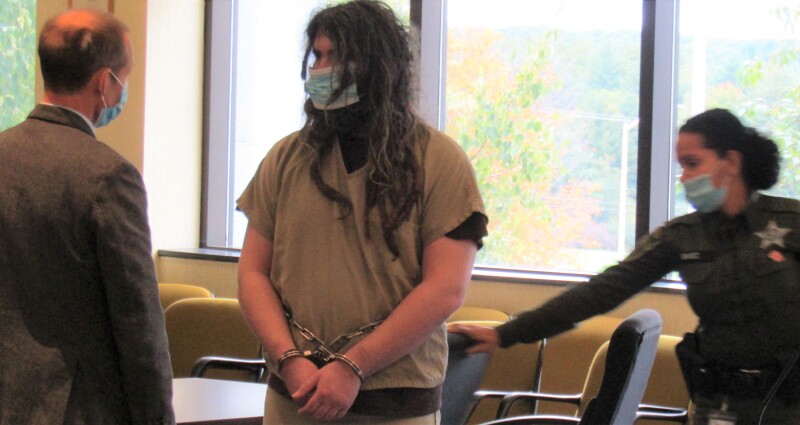 Thyler Thurston speaks briefly with his defense attorney Carl J. Swenson befor being ushered out of the courtroom and back to Strafford County Jail. (Rochester Voice photo)

DOVER - A New Durham man pleaded guilty today to negligent homicide charges in the 2020 death of a Frisbie Memorial Hospital security guard.
The details of a settlement agreement reached between the families of the victim, Richard Semo, 64, of Farmington and Tyler Thurston, 30, call for him to be sentenced to at least two and a half years in state prison.

Semo, a former Marine drill sergeant and security guard at Frisbie, was severely injured during a confrontation with Thurston in the hospital parking lot around 3:20 a.m. on Dec. 13, 2020.
During an April explanation of why he had urged no jail time for his client defense counsel Carl J. Swenson said Thurston had been released from a prison hospital just 24 hours before the deadly encounter and had sought mental health services on seven occasion in the four months leading up to the attack.
Strafford County Attorney Tom Velardi, who helped the parties with the completion of the settlement agreement, said today that the tragic encounter with Semo occurred after it appeared Thurston had been sent to Frisbie by Rochester Police.
Velardi said that after Thurston arrived hospital staff observed that he was making no sense and was angry that someone had told him to put on a mask.
He then apparently went out into the parking lot and quickly became confrontational with another security guard, Velardi said, before Semo came onto the scene and took over while the other guard went back inside.
When personnel returned to the parking lot they found Thurston sitting on a fence and Semo in an out of consciousness with a severe head wound thought to have occurred after he was struck by Thurston and hit his head on the pavement as he fell.
Velardi, who has been working quietly with the parties to piece together the settlement agreement, said both families wanted to avoid a painful trial and were pleased with the agreement that allowed them some closure to the tragic incident.
Thurston had faced a 15-30 year prison sentence if convicted of manslaughter, but the charges were reduced to negligent homicide as part of the agreement.
If Thurston stays on good behavior while incarcerated and completes all programs and education as ordered, he can receive six months off the two and a half year sentence. He begins it with 291 days of pretrial credit.
Thurston also pleaded guilty to one count of disorderly conduct, a misdemeanor that carries a 12-month sentence. That sentence will run concurrent with the negligent homicide sentence.
Thurston, shackled and dressed in brown jail garb, spoke softly as he went over the details of his sentence with Strafford Superior Court Judge Daniel E. Will, who approved the agreement and imposed the sentence.