Lax sentencing, bail policies allow criminals back on the street far too soon 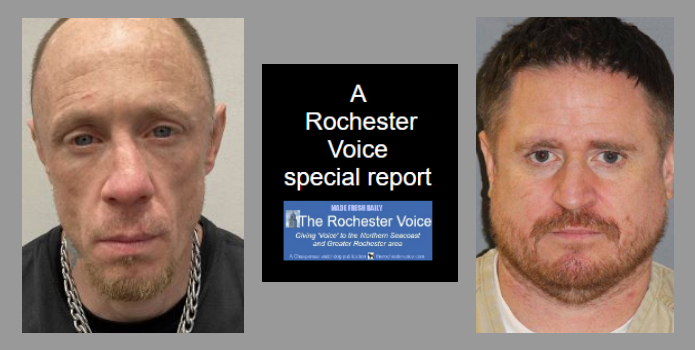 Two recent arrests in Rochester and Nashua are part and parcel of a continuing trend across the state and nation in which revolving door reoffenders get out on parole or bail only to commit more crimes.
On Dec. 21 Rochester Police arrested a former East Rochester man who recently got out on parole after serving a one and a half- to three-year prison term for fentanyl possession and resisting arrest charges from 2019 and a 2020 delivery of articles charge associated with bringing drugs into a detention facility.
Michael Polchies, 41, currently of Somersworth, was arrested after police responded to the Holiday Inn around 5:25 p.m. for a report that a vehicle was driving through the parking lot at around 30 mph and that the driver operator appeared impaired.
Officers located the vehicle nearby at the Shell/Nouria gas station and identified the driver as Polchies, Rochester Police Capt. Todd Pinkham said on Tuesday.
"As a result of observations made by the Officers, Polchies was asked to step out of the vehicle, however he refused and attempted to flee in the vehicle," Pinkham said. "Officers were able to quickly take hold of Polchies and he was then removed from the vehicle. Once out of the vehicle, Polchies began resisting the Officers, but was eventually taken into custody."
Polchies, a convicted felon, was also found to have a loaded firearm on him.
He has been charged with Hand Guns Armed Career Criminal (Felony), Felon in Possession of Dangerous Weapon (Felony) and Resist Arrest/Detention (Misdemeanor).
He remains held at Strafford County Jail following his arraignment on Thursday, jail personnel said on Tuesday.
Coincidentally, Rochester Police arrested Polchies under similar circumstances in 2016.
On June 24 of that year Polchies was charged with several felonies including possession of a narcotic drug with intent to distribute, receiving stolen property, armed career criminal, felon in possession of a dangerous weapon, four counts of possession of a controlled drug and carrying a loaded handgun without a license.
Polchies was also charged with resisting arrest or detention, a Class A misdemeanor.
The arrest came as a result of Rochester Police responding to the parking lot at 77 South Main St. a little after 2:35 a.m. after getting a report of a male in a parked gray vehicle hanging out of the driver's side.
Upon arriving they found a gray Honda sedan which was running with the driver's door open. Inside they located Polchies who appeared to be unconscious in the driver's seat.
As officers attempted to see if he was OK, they observed what appeared to be packages of illegal drugs and a loaded handgun under his leg, police said.
The officers were able to take Polchies into custody, and he was transported to Frisbie Memorial Hospital for observation and possible treatment as he appeared to be under the influence of drugs.
A search warrant was later completed on the vehicle by police leading to the charges.
Polchies also had an active arrest warrant from state Probation and Parole division.
Seized in the arrest were what is believed to be clonazepam, heroin and cocaine along with $2,429 in cash. The handgun that Polchies was in possession of was determined to be previously stolen.

Polchies was sentenced to the three felonies on April 16, 2021, however, all of the charges from his 2016 arrest were nol prossed due to a suppression ruling by the court against the prosecution, County Attorney Tom Velardi told The Rochester Voice on Tuesday.
Meanwhile, longtime Rochester transient and repeat offender Grant William Ohlson was arrested on a fugitive warrant by Nashua Police after the U.S. Marshals Service featured him as a recent Fugitive of the Week.
A public tip led Nashua Police Officers to the corner of East Hollis and Allds streets where the Strafford County Superior and Rochester District Court fugitive was identified and taken into custody.
Ohlson, 43, a longtime Rochester transient, was wanted for failing to appear for an arraignment in a case where he is alleged to have smuggled fentanyl into the Strafford County Jail. In addition, Ohlson had active warrants for theft, probation violations, and criminal trespass.
Despite strong ties throughout Strafford County, Ohlson found his way to Nashua where he was able to lay low for almost two months, according to U.S. Marshals.
In addition to the four arrest warrants, Ohlson may face additional felony charges, as his arrest on Sunday yielded evidence of additional criminal behavior that is still being looked at by the Hillsborough County Attorney's Office.
In June Ohlson, who has a long rap sheet, was released on bail after an arrest on burglary charges. He was arrested again the next day for criminal trespass at a Rochester business.
Ohlson has a longtime penchant for stringing together multiple arrests within hours of being released on bail.
In September 2017 he was charged with theft for stealing a woman's purse from her home shortly after his release by Somersworth Police on no bail on two felony-level theft charges.
Rochester Police say that arrest unfolded as officers responded to a residence on Old Dover Road for what was called in as a burglary in progress.
"The reporting party stated the back door was open, there were items missing and they thought someone may still be inside the residence," Pinkham said at the time of the 2017 break-in.
While clearing the residence, officers located Ohlson, who did not have permission to be there.
Ohlson was arrested on one count of burglary and one count of contempt for violating bail conditions of a prior unrelated arrest.
He was then released on PR bail.
Days later he was arrested again for trespassing at a local business that had a no trespass order served on him previously. He was charged with criminal trespass and contempt for violating bail conditions.
Other arrests this year:
May 19: violation of protective order and an EBW for conduct after an accident.
May 6: EBW for criminal trespass.
April 26: CAPIAS (a Superior Court EBW) for possession of scheduled drug
April 18: Criminal trespass X 2, drive after rev/sus and
Dec. 27: Burglary night plus EBW
July 27: Arrest on Warrant
It should be noted that the May 6 arrest was the result of Ohlson screaming at people and swinging a knife in Rochester in the area of Columbus Avenue and South Main Street near Jimmy Jones restaurant.
No threats were made with the knife and no one was hurt, so no charges were forthcoming in connection with the knife, Pinkham said soon after the arrest.

Ohlson is currently being held at the Hillsborough County Jail.