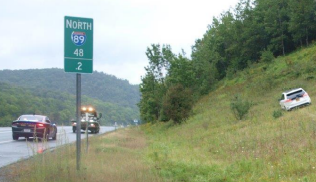 The teen fled into woods after ditching the stolen N.Y. can by the side of I-89. (State Police photo)

SUTTON - A homeless teenager from Rhode Island was charged with receiving stolen property, reckless conduct, disobeying an officer, resisting arrest, conduct after an accident, reckless driving and being a fugitive from justice on Sunday after leading state police on a high speed chase in Sutton.

The fugitive from justice charge was in connection with a first-degree armed robbery in the Ocean State.

The incident unfolded around 2:40p.m. as State Police attempted to stop a New York registered Ford sport utility vehicle on I-89 north in Sutton. The vehicle was clocked on radar at 113 mph as it was approaching a patrolling trooper in a fully marked cruiser from behind.

The driver did not stop and a pursuit ensued during which the suspect vehicle entered and exited I-89 at two different northbound exits before the pursuit was terminated due to concerns for public safety.

A perimeter was quickly established and it was discovered that the vehicle was recently reported stolen out of Rhode Island. A State Police canine unit was deployed to look for the suspect, who was quickly found and taken into custody without incident.

Once his identity was confirmed, State Police learned that there was an active and extraditable arrest warrant out of Rhode Island for the armed robbery.

Elijah K. Cadieux was charged with being a fugitive from justice, receiving stolen property, reckless conduct, disobeying an officer, resisting arrest, conduct after an accident and reckless driving. There are other possible charges pending for theft that are related to the license plate and some new merchandise that was found in the vehicle. The case is still actively being investigated.

Cadieux was taken to the Dartmouth Hitchcock Medical Center in Lebanon for examination and treatment of some pre-exiting conditions that were not related to the crash or his arrest. After he is discharged, he will be transported and held at the Merrimack County Jail on preventative detention awaiting arraignment in the Merrimack County Superior Court on Sept. 7.

If anyone has any further information regarding this case, please contact Trooper Scholand at 603-223-4381.