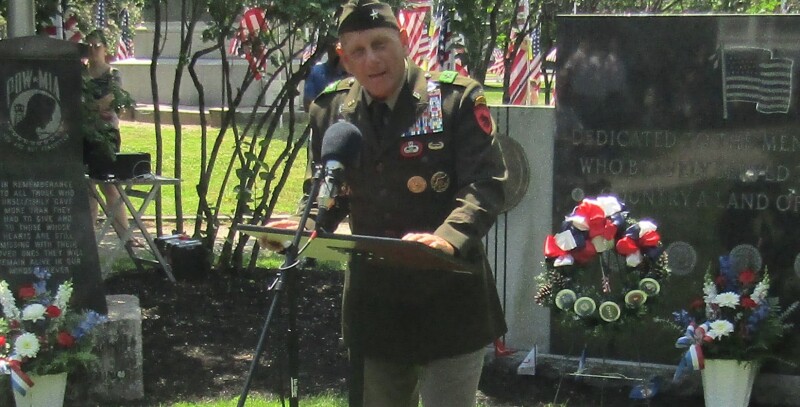 ROCHESTER - A crowd of several hundred gathered at the Common on a warm, sunny Monday to pay tribute to our nation's fallen servicemen and women who died defending our country, our values and our way of life.

And amid the 550 American flags attesting to those who served, including many who made the ultimate sacrifice, keynote speaker General Don Bolduc began and ended his speech with the words emblematic of Granite Staters' grit.

"Live free or die," he began, "because there are worse things than death."

"Thank God for our inalienable rights that come from God," he continued. "From time to time some must die ... to fight tyranny."

Bolduc, a Laconia native who rose through the Army ranks from sergeant to Brigadier General, commanded many of our nation's most famous units during the Global War on Terror, leading one of the first groups in Afghanistan, riding in on horseback.

In his speech on Monday, Bolduc reflected on three of the most significant underpinnings of our country: God, family and community.

"Thank God for family," he said. "Family is what binds us together. If families fail, we fail. And if we don't thank God, we fail. Our children and our grandchildren learn from our values."

During the 15-minute speech Bolduc paid a special tribute to Vietnam veterans saying their return home was a "black stain on our nation's soul."

"When they came back they were not treated well. That was not only hard on them, but those who passed, too. They deserve our undying love and respect," he said to cheers and applause from the crowd.

"A nation that forgets its fallen will soon be forgotten," he added.

During his speech Bolduc also made reference to the 75 men and women he'd sent into battle that didn't come home, "some of whom I watched die."

"Every day I try to live my life respecting them," he said.

He ended by saying, "God, Family, Community will ensure we remain free. God bless you all. God bless American. Live free or die."