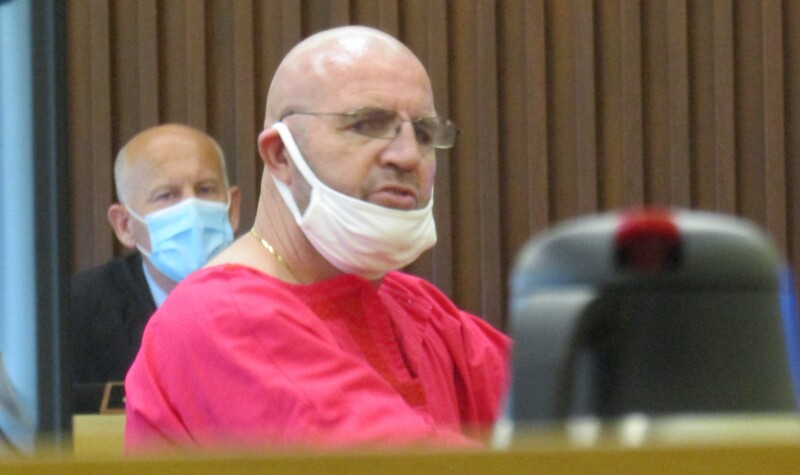 CORRECTION - The Attorney Generals Office executed a search warrant of the defendant's residence in March 2018. An earlier version of this story referenced a different law enforcement agency.

DOVER - A former town of Milton department head and resident is on trial this week, accused of bilking a half million dollars from a Rochester woman's estate.
Michael R. Smith, 59, of Avon Park, Fla., who was a former Department of Public Works director for the town of Milton, is accused of stealing the money from former Milton selectperson and library trustee Mary G. Kibbe, who died in 2017 at the age of 98.
Smith, who is representing himself at trial, concocted phony notary seals and power of attorney documents, forged Kibbe's and local attorneys' signatures and photocopied law firm letterhead in advancement of his scheme, argued Senior Assistant Attorney General Brandon Garod in his opening statement on Monday.
"Mary Kibbe had amassed a $2 million estate," Garod said. "Her two husbands had predeceased her, and she had no clear heir."

Garod argued that she had made it clear she wanted to leave her entire fortune to the United States Naval Academy as one of her husbands had graduated there, but that Smith had moved into her house in the final months of her life and worked a scheme to steal her fortune.
"She shared with a number of people that she wanted to give her money to the Naval Academy, but in the final months of her life the defendant forged signatures of notaries, used fake notary seals even fake letterhead from local attorneys that said he was to have power of attorney of her accounts," Garod said.
Smith, who wore an orange smock to trial on Monday similar to Hare Krishna followers, is facing five Class A felonies, three for attempted theft by unauthorized taking and two thefts by unauthorized taking. Each felony carries a seven and a half to 15 years prison stay.

Garod said Smith might have gotten away with his scheme but for friends of Kibbe's who insisted on seeing her soon after he moved in to live with her in September of 2017.
Garod said Smith would say Kibbe was sleeping, then later that she didn't want to see anybody else.
As her 98th birthday approached on Oct. 31, Kibbe's friends went to police, who obtained a search warrant to enter Kibbe's home where they found what appeared to be forged documents "all over the house, including two new versions of her will making him (Smith) the sole survivor" and heir, Garod said.
He added that Smith also used phony power of attorney forms to get at her money at various Rochester banks and credit unions as well as annuities at local investment firms.
Smith began his opening by saying Kibbe had been his friend since 1982, but soon launched into an extended diatribe about how wrong it was for investigators from the Attorney Generals Office to disconnect his surveillance system when they entered his residence with a search warrant in March of 2018.
He also accused detectives of lying and that the prosecutor (Garod) was trying to defend the breaking of laws.
"They took evidence and destroyed it," Smith said. "They had my computer for four years and then wanted me to sign that I accept what's on it. It took two years to get the case going because they wanted to make sure they got their story straight."
The charging dates on Smith's five felonies include one on Sept. 7, 2017, two on Oct. 4 and two more on Oct. 24. He was indicted in June 2018.

The indictments also allege that Smith is subject to enhanced penalties for taking advantage of "(Kibbe's) age or a physical or mental condition in such ways that impaired her ability to manage her property or financial resources.

A source familiar with both Kibbe and Smith, who lived in Milton Mills, told The Rochester Voice shortly after Smith's indictment that the two were very close despite their vast age difference.
Smith's Facebook page at the time of the indictments showed he was a former Milton Water commissioner and Sewer commissioner, a member of the Zoning Board and Planning Board and on the Strafford Regional Planning Commission.
It appears that Kibbe served at least two terms as selectman before losing in a disputed 1997 election in which a write-in candidate running against her distributed stickers outside the polls to be placed on town ballots.
A ruling by Judge C.J. Brock in September of that year ruled that the use of stickers did not "invalidate" the election which was ultimately won by Joan Tasker Ball, whose combination of write-in and sticker votes totaled more than Kibbe's ballots.
Kibbe later moved to Stanleys Pond Drive in Rochester, where she spent out the rest of her life until passing on Nov. 11, 2017.
Smith's theft case history is a full 16-pages, with numerous motions made by Smith to dismiss the case on evidence issues such as "fruit from a poisoned tree," professional conduct and corruption and conspiracy in concert
A jury trial was scheduled for July 2019, but never materialized.
The trial continues on Wednesday and is expected to wrap up next week.
Assisting Smith is Strafford County public defender David Bettancourt, who did not speak on Monday.