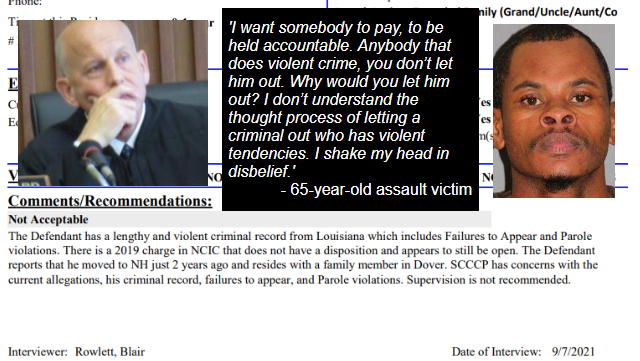 DOVER - An elderly Dover woman who was sexually assaulted while sleeping by a man released on no bail twice in a separate sex assault just weeks earlier is angry and looking for answers and accountability in what she sees as a gross negligence of a justice system that is supposed to keep citizens safe.

The 65-year-old victim, who lives on New York Street, agreed to an exclusive interview with The Rochester Voice this week as long as she was allowed to stay anonymous and we didn't take her picture.

"Ever since this happened I have not been able to sleep," she said as she sat outside her back stoop on an unseasonably warm Wednesday, her hands clutched on her lap. "I feel anxious. I come outdoors for a cigarette and look over my shoulder."

The trauma of that night has also touched her 11-year-old granddaughter, who was awakened as the alleged intruder, Donald Levier, 35, of Somersworth, raised a ruckus in her bedroom as the victim tried to get her attacker out the door.

"She doesn't even want to take the trash out, she's petrified," said the victim, who lives with her daughter, her daughter's boyfriend and their three children.

On Sept. 27 just hours before police say he attempted to sexually assault her, Levier removed his GPS bracelet while Strafford County Community Connections was attempting to track him for Dover Police, according to documents obtained by The Rochester Voice.

Three weeks earlier - on Sept. 7 - Blair Rowlett, SCCC's director of Community Supervision Mental Health, wrote an assessment following Levier's arrest by Somersworth Police in a separate and more violent sexual assault in which he is accused of strangling a Somersworth woman during an attack inside her mobile home.

The Somersworth arrest occurred on Sept. 5 after officers responding to calls for help found Levier had gained access to a mobile home belonging to a female and attempted to sexually assault the victim by throwing her on a bed and trying to remove her pants and underwear.

The Somersworth incident report also alleges he slapped and strangled her and also held her down.

When Police arrived they found Levier with no clothes on in the woman's bathroom where he was arrested. He was charged with sex assault, simple assault, criminal restraint and second degree assault.

Somersworth Police Chief David Kretschmar told The Rochester Voice recently it was in no way domestic violence related, but a random attack.

Prior to Levier's arraignment on Sept. 7, Rowlett filed her own assessment concerning his suitability for supervision by SCCC, which evaluates whether suspects charged with crimes can be allowed to remain free - with specific and individualized conditions - while awaiting trial or plea deals.

Her assessment found Levier "Not Acceptable."

"The Defendant has a lengthy and violent criminal record from Louisiana which includes Failures to Appear and Parole violations," she wrote. "There is a 2019 charge in NCIC that does not have a disposition and appears to still be open ... SCCCP has concerns with the current allegations, his criminal record, failures to appear, and Parole violations. Supervision is not recommended."

Rowlett told The Rochester Voice that based on her Sept. 7 assessment she didn't find him a "proper fit" for their risk assessment protocols.

"He's not from this part of the country, so based on flight and risk to the community I was against it," she said.

About a week later on Sept. 15 Levier was returned to Strafford County Jail after he was tracked by GPS in an "exclusion zone," near the domicile of the Somersworth woman he allegedly assaulted on Sept. 5.

He was released by the court again on Sept. 15 with orders for SCCC to continue to supervise his release.

Rowlett said at this point her department added an "inclusion zone," which restricts movements from his assigned domicile, but on Sept. 24, a Friday, Levier told them he was going to stay with a new friend.

She said the "inclusion zone" for his new domicile couldn't be implemented that night because they had to confer with his new roommate to make sure he was aware of SCCC's monitoring.

Just three days later on Sept. 27 Levier's "inclusion zone" became a moot point as he removed his GPS bracelet and wound up on New York Street where he is accused of entering an elderly woman's apartment, climbing into her bed and fondling her as she slept.

According to an affidavit written by Dover Det. Andrew Courter, Levier entered her residence around 1:10 a.m. on Sept. 28.

The affidavit notes that the woman uses a CPAP breathing machine and had gone to bed between 10 and 11 p.m. only to awake to feel a hand moving down her back and onto her buttocks in the areas of her vagina and anus.

Startled, she sat up in bed and saw the person whom she described as a thin black male who smelled strongly of alcohol and cigarettes and had an erect penis, the affidavit states.

The man said "Let me get a piece" and "come on, Mommy," according to the affidavit.

The victim said she told him to get out and was ushering him to the front door when he turned and went into her granddaughter's room, tried to exit through a window but then slammed the window down waking up the granddaughter.

The man then went to the front door and finally left after which the victim called police, the affidavit states.

Looking back on what happened that night the elderly Dover woman still has a hard time talking about it, saying it was like a bizarre, unsettling and disturbing dream she had a hard time describing.

"I woke up to someone touching me inappropriately," she said quietly on Wednesday, adding during the attack his hand and fingers groped her private parts. "It was like I was dreaming, it was very, very strange, scary, I was disoriented, thinking there's someone in my house in my room and doing this ... I had no clue, it's hard to put into words, had he had clothing on and I could see through the clothes his erect penis... I felt so violated."

She said she told him to "get out, but he went into my granddaughters room" which was the room he had entered through a window.

"He then slams the window shut he'd come in, and I screamed at him to get out. When I screamed it woke up my (oldest) granddaughter."

She said she finally got him to leave her granddaughter's room, ushered him to the back door and told him to leave.

"As he was leaving he asked, 'Can I have a cigarette' and I yelled, 'Get the hell out of here' and he finally left, she said. "Can you believe that?"

She thinks Levier is likely a serial offender who should be off the streets.

"The way he did it, I felt like I knew he'd done this before," she said.

When she learned that a judge had ordered Levier be released on no bail after the earlier attack at the Somersworth mobile home park and also after he had violated the exclusion zone mandated by Strafford County Community Corrections when he visited the area near the first victim's residence, she became furious.

"I want somebody to pay, to be held accountable," she said angrily her voice rising. "Anybody that does violent crime, you don't let him out. Why would you let him out? I don't understand the thought process of letting a criminal out who has violent tendencies. I shake my head in disbelief."
She said she's talked to an attorney about a lawsuit, but hasn't moved forward yet.

Patrick Conroy, the Assistant Strafford County attorney prosecuting the case, said earlier this month that he made the argument after Levier's first arrest that he be held in jail while awaiting trial. Strafford County Community Connections Blair Roweltt, the director of community supervision mental health, agreed, saying in her assessment: "The defendant has a lengthy and violent criminal record from Louisiana which includes Failures to Appear and Parole violations."

Strafford County Superior Court Judge Mark E. Howard, however, ordered SCCC to supervise him, and Levier was released on no bail with conditions from SCCC.
Just two weeks later he was picked up and jailed after he was found in his "exclusion zone" near the domicile of the victim at the Somersworth mobile home park.
Again after another negative assessment from SCCC and against the arguments of Conroy, Howard released Levier again on no bail to SCCC.
Strafford County Attorney Tom Velardi told The Rochester Voice recently that under no circumstance could the digital daily be allowed access to ask Howard why he did what he did since Howard is part of the judiciary.
Levier, meanwhile was arrested around 1 p.m., about 14 hours after he is accused of assaulting the elderly Dover woman. He was found by police hiding in woods near the Dover Public Library.

Levier is charged with felony assault (strangulation), false imprisonment and simple assault in the Somersworth case and attempted aggravated felonious sexual assault and burglary in the Dover case, charges the Dover woman takes exception to.

Levier continues to be held at Strafford County Jail on no bail. He has been there since his most recent arrest on Sept. 28.

Meanwhile, the Dover victim said she is totally traumatized from the incident and says she needs to leave Dover despite the hardship it may be to find a rental unit for her large household.