Delemus, still bitter about justice system, looks forward to getting back his life 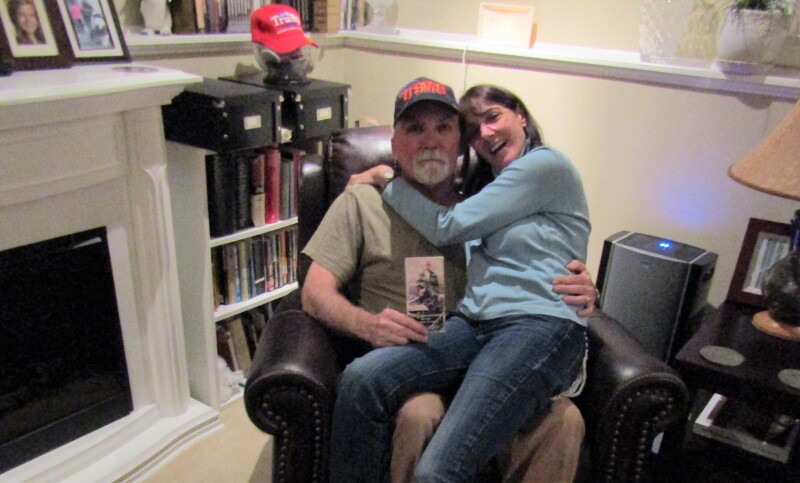 Jerry Delemus relaxes with his wife, Susan, at their Rochester condo on Thursday. (Rochester Voice photo)

ROCHESTER - The sweet smell of deep-fried fish and chips smothered in tartar sauce and ketchup wafted through the Delemus household on Veterans Day as decorated Marine Jerry Delemus and his wife, Susan, a New Hampshire state rep, enjoyed his third day of freedom after spending 2,077 days behind bars.

Sweeter still for Jerry Delemus is the chance to be back with his wife and living in his Rochester condo, the very same condo a phalanx of FBI vehicles full of armed agents in full tactical gear swarmed on March 3, 2016.

"I'm grateful to be here," said Delemus, who ran a prison ministry while an inmate at federal prisons in Nevada and Massachusetts.

In an interview with The Rochester Voice, his first since being released from FMC Devens in Devens, Mass., Delemus expressed frustration and bitterness with a federal justice system that was more concerned with getting a convictions than giving someone a fair shake.

"The government is so bias; they lied. Of all those indicted 98 percent get convicted, either through plea deals or jury trial," he said. "What does the government do that they do 98 percent correctly? Nothing!"

Delemus, a Tea Party activist and former co-chair of the state Veterans for Trump for President group, was named in a March 2016 indictment as a midlevel leader and organizer in the 2014 Cliven Bundy standoff with federal agents over grazing rights on federal land in Nevada. The indictment also alleged he: recruited, organized, trained and provided logistical support to gunmen and other followers and organized and led armed patrols and security checkpoints from April 12 till the end of May 2014.

Delemus said he was facing decades in prison, but was willing to go to trial to prove his innocence until a dear friend from Keene who had traveled to the Nevada standoff with him was stricken with cancer.

Delemus said the feds were threatening to extradite him to Nevada where he would be questioned about their involvement in the Bundy standoff, and perhaps indicted, he said.

"We'd been friends for 30 years. I couldn't do that to him, he would have died in prison," Delemus said, "so I took the six-year plea deal." That friend has since died, he said.

Then just months after he signed the plea deal, Cliven Bundy and others charged in the standoff were acquitted after numerous Brady violations were discovered. Brady violations are when the prosecution withholds exculpatory evidence.

When the Brady violations came to light, Delemus filed a motion that he be released from his plea deal sentence but former U.S. District Court Judge of Nevada Gloria M. Navarro denied it, a fact that still eats at the former Marine.

After more than five and a half years behind bars - put there by corrupt prosecutors proved to have stacked the deck - it's no wonder Delemus feels embittered by the way the justice system treated him.

Still, he refused to be beaten by it, already working on Thursday to prep his contracting business work truck to get it ready for his next job.

After his release on Tuesday he now faces six months of home confinement and three years of parole, he said.

During the six months home confinement on a GPS monitor he has to notify his parole officer of where he'd like to travel and what he'd like to do, adding while he can do most routine errands, he can't go out to dinner.

For all he's been through he remains true to his country and his service, his beloved Marines, who celebrated their birthday on Wednesday.

"I love this country, I'd die for this country," he said. "If the Marines put out a call for old bald men I'd be there."